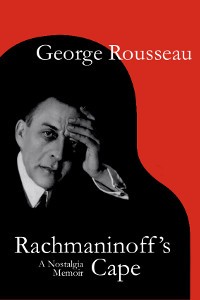 Rachmaninoff’s Cape: A Nostalgia Memoir (to be published March 2015)

GEORGE ROUSSEAU wrote academic books for four decades until something happened. His best boyhood friend’s mother died and left him a large trunk filled with her diaries and papers enabling him to chronicle her fascination with the great Russian pianist-composer Sergei Rachmaninoff. He was so gripped he felt he had to tell her story, and could only reconstruct it set against the backdrop of Rachmaninoff’s Silver Age Russia and New York City’s musical world in the early twentieth century. But another concern soon became evident, the American obsession with the much-misunderstood condition of nostalgia in the post-Romantic age.

Eventually Rousseau saw how these themes were related and melded them into a gripping memoir – Rachmaninoff’s Cape – about all three lives, Evelyn’s, Rachmaninoff’s, and his own.
Especially poignant is the story of how Jewish Evelyn Amster herself almost became a concert pianist, how her obsession with Rachmaninoff developed at an early age, and – most intriguingly – why our received sense of Rachmaninoff’s life is inadequate for understanding the man and his music. This ‘nostalgia memoir’ will appeal to readers who love classical music, as well as those curious about the lives of great composers and the biographers who retrieve their lives in a historical setting.
George Rousseau is a professor of history at Oxford University and was the Co-Director of its Centre for the History of Childhood until 2013. An American, he has been called a remarkable polymath for the range of his knowledge and scholarship in several fields. He himself trained to become a concert pianist in New York City before crossing over into academic life.